Each heading below will expand. Click on a program type to see our range of programming. 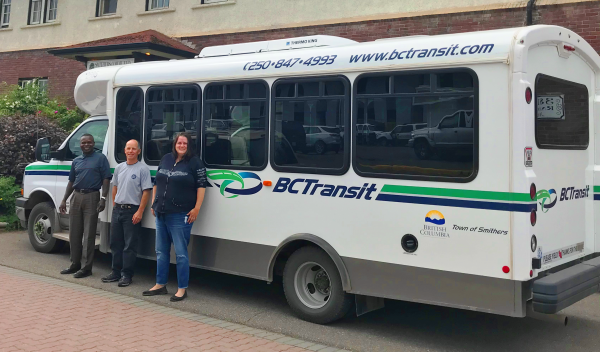 Congratulations to Joanne Lee, Smithers & District Transit Manager, and her dedicated team of drivers for scoring the highest performance rating of all the BC Transit systems in the province!  BC Transit ranked all transit system providers against performance indicators such as safety and security, operations, fleet, training, and environment and climate action.
"This would not have been possible without the tremendous service we receive from Hoskins Ford to maintain our fleet and keep our service running reliably," said Lee.
The Board and Staff at Smithers Community Services Association would like to express their sincere appreciation to the staff at Smithers & District Transit for their hard work and the great service they deliver to the community.
Photo (L-R):  Komi Pelawalo, driver; Gary Schmidt, driver; Joanne Lee, Smithers & District Transit Manager.